Below are various stages of construction of Proxie's components 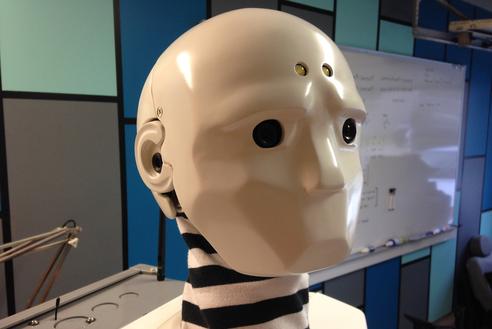 My non-academic research is on the nature of tele-robotics and tele-existence.  I have been developing a fully functional humanoid tele-existence robot called "Proxie" with 3-D vision and 3 degree-of-freedom head tracking capability.  This allows the user to wear a virtual-reality style helmet with a stereoscopic display and wirelessly control the orientation of the robot's head with their own.  The robot is equipped with two cameras in place of its eyes.  The video from these is combined into a stereoscopic (3-D) image and transmitted back to the helmet display.  This all happens in real time without noticible lag, giving the user the impression of "being" wherever the robot is.  There are small microphones in the ears of Proxie which allow the user to hear in stereo, giving surround sound to the 3-D remote environment.  The helmet and robot are both handmade using an epoxy along with other building materials.  It drives on an chassis I made from a modified electric wheelchair base, which is currently controlled by a remote control of my own design.

Arms for Proxie are under development which will be controlled by gloves worn by the user.  They will control the motion of bionic arms on the robot with the same technology used in the helmet.  Highly functional hands will allow the wearer to truly interact in a remote environment.  Once complete, the remote control used to drive the robot around its environment will be replaced by foot pedals the user will operate from a control chair, leaving their hands free to control the robot's arms.